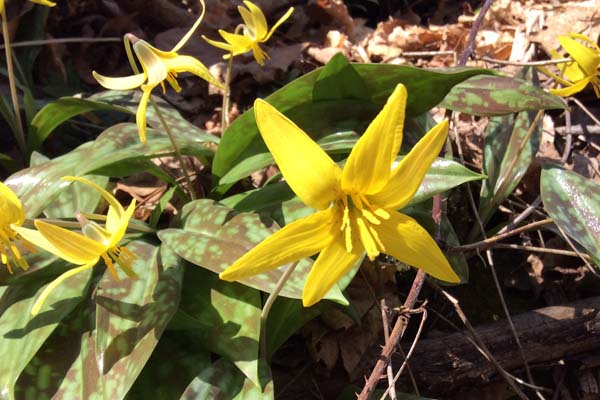 Among our locally most common perennial spring flowers are Spring beauty (Claytonia virginica), Trout-lily (Erythronium americanum), Jack-in-the-pulpit (Arisaema triphyllum), Dutchman's breeches (Dicentra cucullaria), Toothwort (Cardamine concatenata), and Bloodroot (Sanguinaria canadensis). Canada mayflower (Maianthemum canadense) is also found among that array of our very common spring perennials, but it can additionally thrive in the less rich oak dominated woodlands. The leaf and flower buds of all of these plants had been formed during the prior summer and then lay dormant until late April or early May. By the time the overstory canopy has fully developed in late May or early June, these spring ephemerals have already loaded up their rhizomes (underground stems) and root systems with enough stored food to enable them to do it all over again in the following spring. Most of them then become hard to find during the summer and autumn. 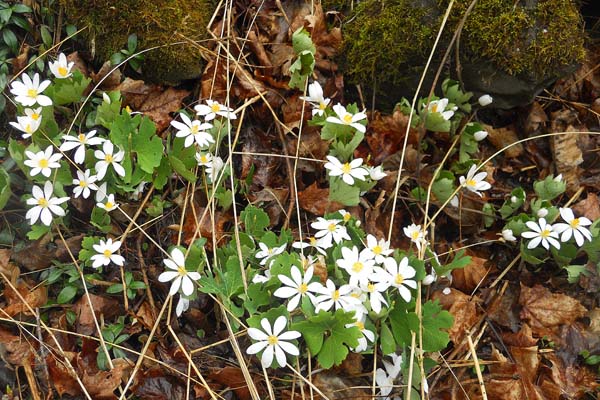 
Most of our spring flowers produce colorful and/or aromatic flowers attractive to a variety of bees and to some flies (the latter, e.g., those of Jack-in-the-pulpit). Thus most of the spring flowers reproduce sexually, for the most part through cross-pollination. However, many are at least occasionally self-pollinating, among them Bloodroot, the Violets (Viola spp), Wild ginger (Asarum canadense), and Hepatica (Hepatica americana). Oddly enough, the flowers of a few of these plants produce fruits and seeds without the bother of having their ovaries fertilized (a phenomenon known as parthenogenesis), e.g., Trillium (Trillium grandiflorum).

Moreover, on top of their sexual reproduction, various of the spring flowers additionally depend heavily on vegetative (asexual) reproduction, especially Bloodroot and Trout-lily, so that large patches of these two plants are most likely to comprise a single clone (each individual thus being properly referred to as a ramet). Spring beauty is something else again: its flowers open each day for about two to three weeks, doing so in a repeating cycle in which for one day they are functionally male (staminate), followed by several or so days of being functionally female (pistillate).


The seed dispersal of spring flowers provides another fascinating story. For most of the spring flowers, each individual seed they produce has attached to it a small lipid-rich body (called an elaiosome) that ants crave. So they carry off the seeds, eat those attached morsels, and then discard the seeds hither and yon. On the other hand, once ripe, the fruit capsule of a Spring beauty explodes, thereby shooting the enclosed seeds up to 2 feet (0.6 m) away.

Finally, in addition to having made good use of an otherwise empty niche in one of our local hardwood ecosystems, the spring flowers also serve the useful function of retaining nutrients within that system which might otherwise have been washed out as the winter snows melt and run off.